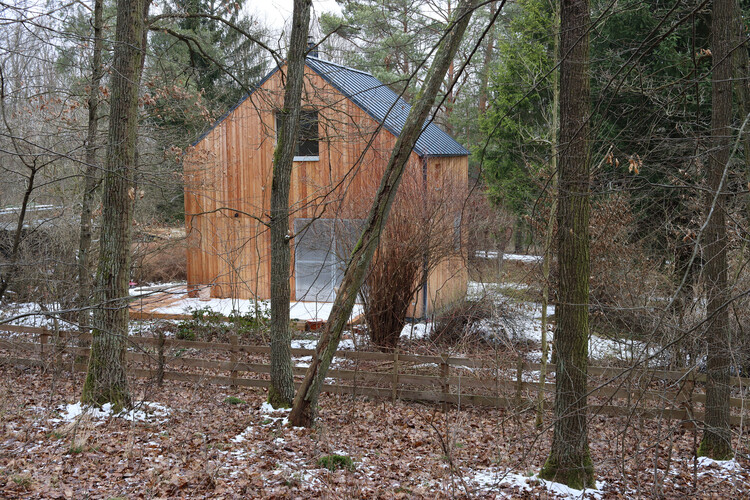 The house was designed for a couple seeking a weekend getaway in the woods to balance their busy everyday lives in the Czech capital. The site is located near Žloukovice village in a protected landscape area Křivoklátsko.

Decades ago, a community of „tramps“, young people influenced by E. T. Seton’s woodcraft movement, used to build small cabins in the local woods. A row of such cabins formed a small settlement in the middle of a large forest near Žloukovice. The plot situated in this settlement was exactly what the clients had been searching for.

Today there are strong regulations all the new houses built in the protected landscape area have to follow. The rules determine the slope of a gable roof, the orientation of the roof ridge, and even demand a lateral entry into the building, vertical timber cladding, etc. The new houses have to be built on the grounds of the former cabins and are allowed to exceed the previously built-up area only slightly. Our aim was to work with the feeling of being in between the southern and northern parts of the surrounding forest and keep the interior private from the neighbors in the east and west. The house was to gain as much as possible from the beautiful scenery while following all the regulations and tight budgets.

Therefore, the house is designed as a small, simple gable roof timber house. On the ground floor, the living room and kitchen open through large windows towards the southern and northern woods. The large window in the southern facade can fully slide into the wall, merging the outer and inner living space. In the attic, there are opposing windows in the southern and northern facades, so the master bedroom feels like being in between the northern and southern woods as well. The square windows frame the forest scenery like paintings that change throughout the year.

The built-up area of the house is only 6,75 meters by 6,75 meters. Still, the house meets all the client’s needs for a simple yet comfortable life and is often even used to host visiting family and friends. The dimensions of the entry, bathrooms, and staircase are modest, so the living rooms can be more spacious. The primary heat source of the house is a traditional cast iron fireplace stove. The additional electrical heating is used only on cold winter days.

Prefabricated load-bearing timber panels were set up on the construction site within a day. The facade is made of larch planks of varying widths. The windows are protected by window shutters made of steel frames clad with perforated aluminum sheets for safety reasons. Spruce, a material traditionally used by the tramps, is used in the interior. There are oiled spruce floors and a solid spruce staircase. Spruce boards have been used for the built-in furniture and custom-made sliding doors.