In our Jack Move guide we’re going to talk about the best software and hardware you can buy in the game, so that you can become as badass as possible, early in the game.

While you probably don’t need our Jack Move guide to explain this, let’s just be clear: software is this RPGs equivalent of magic in a Final Fantasy-style game of old, while hardware are purchases you can slot into one of three expansion slots that change your core being. You might get Armor chips that make you have a better defence, or simple RAM + modules that give you more options in the software department, but either way, Jack Move opens up very early on with a shop full of items, and it can be overwhelming. With our Jack Move guide, we’ll let you know which software, hardware, and items to buy to maximise your time with the game.

Hyperderm is a major upgrade to your healing powers. Costing 3500 it heals you a “large” amount, and although the early healing spell Intravene costs less Data (costing 4 data compared to the 15 Hyperderm uses), it’s just better to get it early so when the enemy levels ramp up and hit harder, you’re ready to heal larger amount of health when you need it.

Brute Force is an excellent early game piece of software to grab as it allows you to “Hack an enemy multiple times”. Should you find yourself in a level and low on data (or mana/magic to most people), this means you can get multiple standard physical attacks in without losing even more. This kind of software can be the difference between success and failure, and given that a death means you lose 15% of your level progress, it can be a lifesaver. 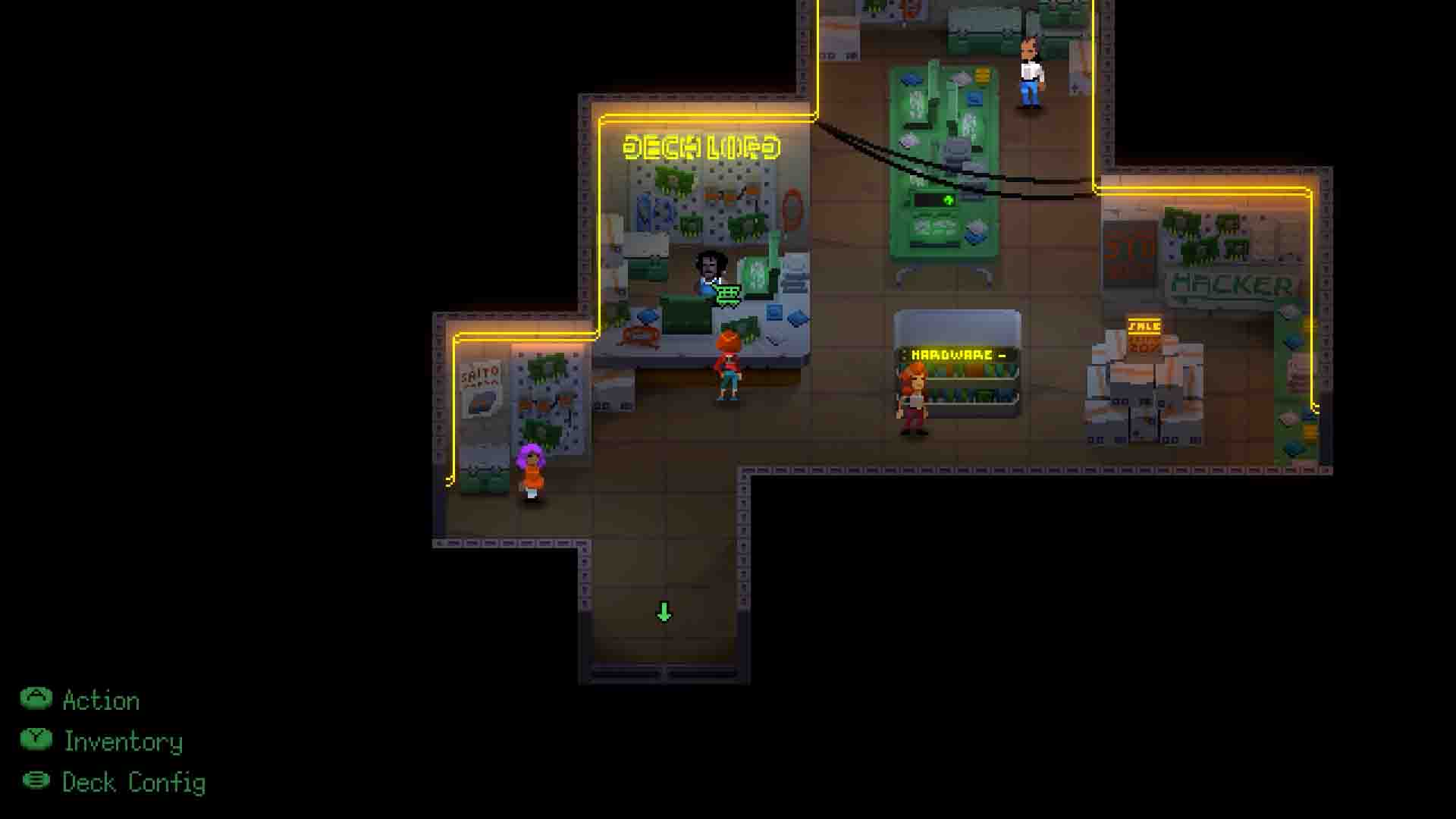 Megahurt is probably the most obvious name for any “spell” in an RPG ever, but this basically increases your physical damage. It costs 16 data, which is pretty high, but the software itself is only 2500 in the shop. This will help you whittle boss health down far quicker, and combined with Brute Force (above) you’ll do a lot of damage without using too much software data.

System Cycle costs 8000, so it slightly higher cost than most of our choices, but removing negative status effects is a must in any RPG. It’s a simple piece of software, but essential to at least have upon your person, even if it’s not always equipped. Given you can change software mid-fight with the cache command, this one is important to have.

Poison Cache costs 5000, and is exactly what you expect it to be. Costing a large 25 data, it poisons the target, so you can focus on another opponent on the battlefield while their health is gradually reducing each turn. It’s excellent for when you have a lot of enemies on the screen at once and are struggling to manage them.

Best hardware to get early 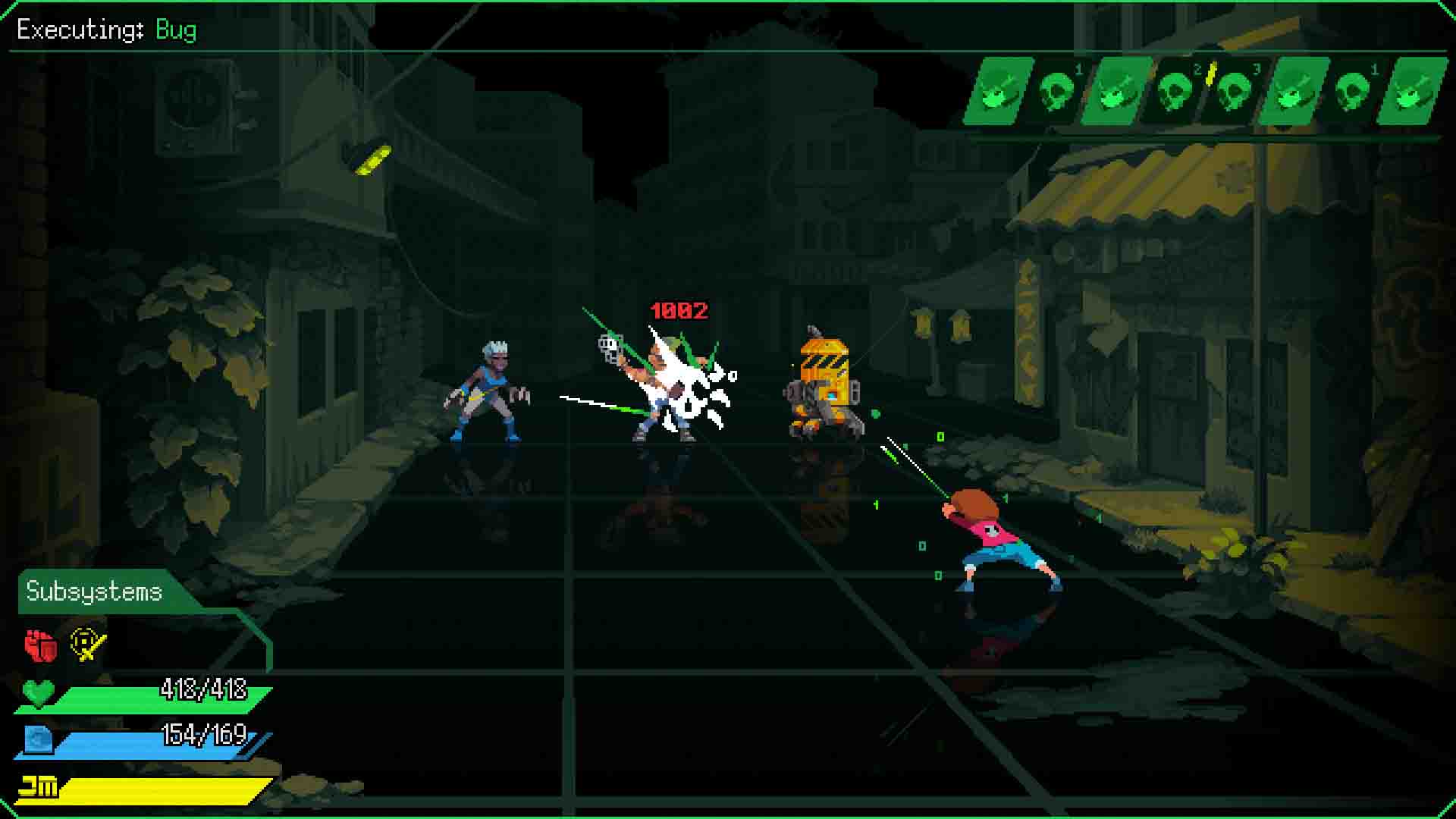 Counter-Hack is a must buy piece of hardware. The description is “Enables the Counter-Hack subsystem. Automatically retaliate against any incoming attacks with a low strength physical strike”. If it didn’t sound obvious enough, this means you will counter every attack made against Noa with a weaker than usual “hack” physical attack. Early on you’ll be doing around 90-100 damage for this retaliation attack, but it means you are pretty much always doing damage, no matter what the situation. As you progress this one becomes less useful as the damage numbers just don’t stack high enough, but as an early piece of hardware it’s a must. That said, it contributes to your Jack Move special ability, so even later-game isn’t a bad shout.

RAM + 8 pretty much does what it says on the tin. Equipping this means you get an extra eight RAM slots that will allow you to equip extra software (this game’s version of magic attacks) and give you more ways of dealing with multiple types of enemies. It’s not as essential as Counter-Hack for our money, but it’s a mid-priced piece of hardware (costs 8000) and gets you more choices without spending out on the higher end RAM + modules, while giving you more options than the lower ones.

Auto-Portscan is a godsent if you played lots of old fashioned RPGs, as it automatically shows you the enemy stats for every fight. It’ll cost a mere 4000, but compared to the regular Port Scan which only lasts per fight as it’s software based, it’s a far better investment than grabbing the software for 1000, so you should definitely think of getting the hardware version instead. Just be prepared to wait a bit, as this one requires level 15 to equip it. 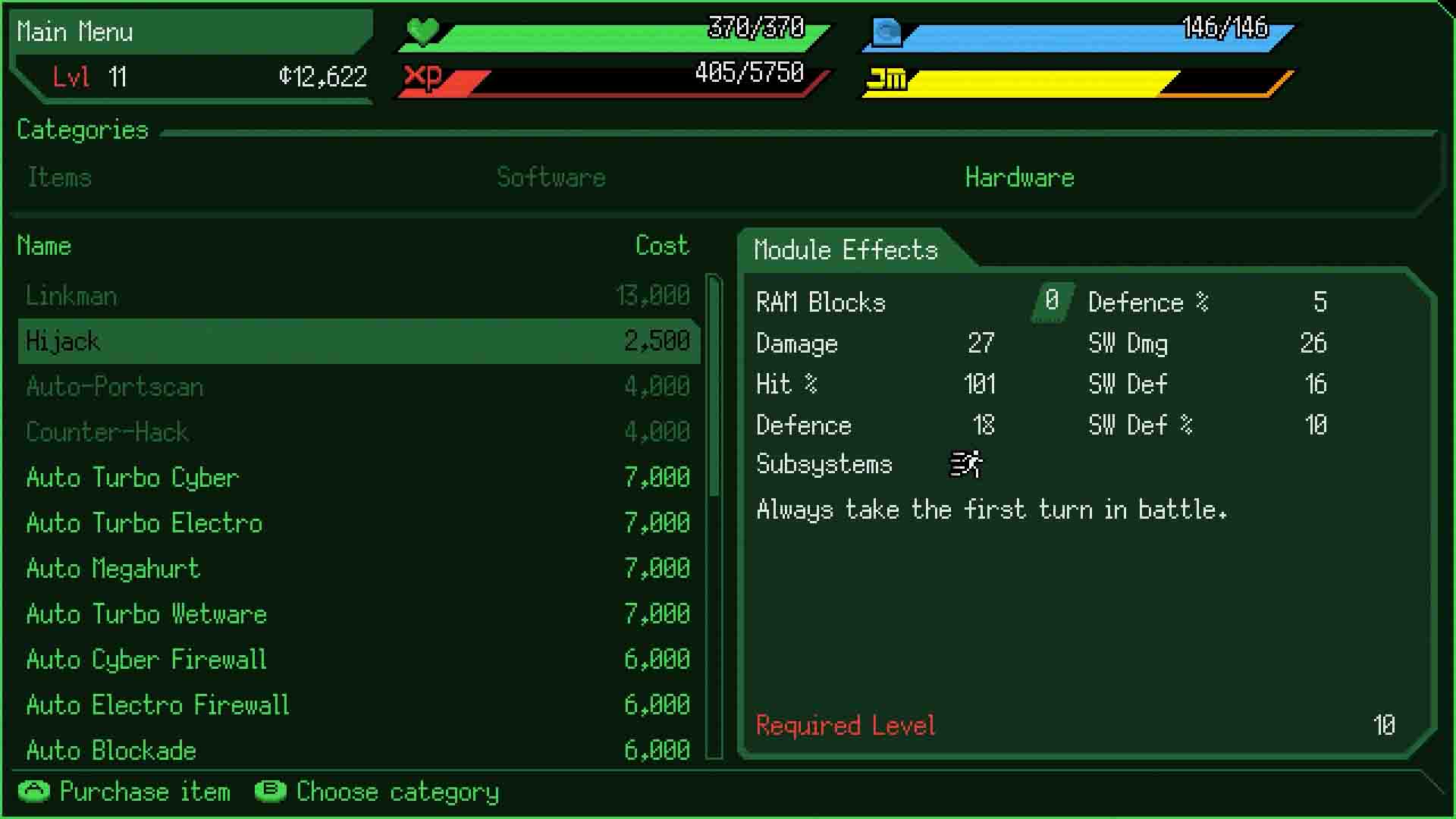 Hijack is another serious contender for best hardware, costing only 2500, as it gives you a major buff. Simply put, Hijack means you always take the first turn in battle. When you’re early in Jack Move and facing 2-3 enemies at once, but can eliminate them easily with one move, this means you get off to a quick start. You’ll need to be level 10 to use Hijack, but you’ll unlock that within an hour of play, no hassle.

Hardware Expansion Slot is an odd choice, but at 8000 it’s essential early on. It feels more like an item than actual hardware, but what it does is unlock one of the otherwise locked hardware mod slots. This means you can equip two hardware mods early on, and have more choice and less frustration when it comes to choosing any of the above listed mods.

Linkman is probably the last one you’ll unlock as not only does it cost 13000, you need to be level 20 to use it. However, it’s a game-changing piece of hardware as it makes your offensive software target all enemies on the field. In other words, one Glitch attack will hit all three enemies at once. Definitely grab this, just somewhere down the line, and not right away.

Liked it? Take a second to support GodisaGeek.com on Patreon!